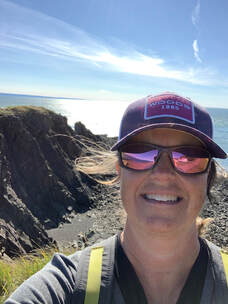 Katie has over 20 years of experience in the field of Athletic Therapy.  After completing her BSc in Biology from Dalhousie University she graduated from Sheridan College in 1999 with a Diploma in Sports Injury Management. She then went on to work at Sheridan College where she managed and taught in the Sports Injury Clinic. During the next few years she worked at the Barrie Sports Medicine Center as well as with the Hamilton Tiger-Cats of the CFL before moving back to Nova Scotia in 2003.  Katie then worked at several different locations over the next few years in addition to opening 2 retail stores and having 2 children. Katie had the opportunity to work at the 2010 Vancouver Olympics at the Whistler Sliding Center covering bobsled, skeleton and luge events.  At the 2015 PanAm Games in Toronto she was the Lead Therapist at the Equestrian venue. Katie has had the pleasure of treating many elite level athletes over the years including Olympic and National Team members from several different sports as well as many professional athletes. When she isn't competing in horse shows herself, Katie can be found helping her daughter, Bella, show her pony or taking in the action at a motocross race or a freestyle skiing competition with her son, Malcolm. She also loves hiking and skiing and all outdoor activities!
Having gone through several major injuries herself, Katie knows all too well what it is like to be injured. This is why she loves to help others overcome injuries, whether they are new or old, and help her patients get back to an active lifestyle!